Humans are characterized by the use of fire, for many purposes: cooking, keeping warm, transport and a range of industrial processes. This fire-based technology forms the basis of our success as a species. At the same time, human are closely linked to water. We prefer to live on the coasts of rivers, lakes and seas, we need to drink liters of water every day, and we almost deplete the oceans from their fish. It is therefore not surprising that scientists wonder how far back in time these dependencies on fire and water go. And even, if fire and water made us what we are today.

Richard Wrangham has argued that cooking was invented by early hominins almost 2 million years ago. By making food more digestible and nutrients easily available, cooking would explain why our lineage could grow such typical big brains. If true, then it could be said, “fire made us human”. However, Wil Roebroeks and colleagues found that control of fire appears to be a relatively late development, less than half a million years ago. Another group of scientists has argued since the 1960s that “water made us human”. Such waterside hypotheses range from an all-out “aquatic ape” adaptation to water, to just wading and foraging along the coast. One of the most pertinent arguments for the relevance of water appears to be the role of certain nutrients found readily available only in food from aquatic ecosystems: iodine and the fatty acids DHA and EPA. If we do not have enough of these nutrients, we suffer the consequences: impaired growth, problems with eyesight, brain development, and a range of diseases (cardiac disease, depression) associated with an affluent “Western” lifestyle. However, while important, these nutrients as such do not provide a satisfying explanation for our spectacular braininess.

In my presentation I will discuss the scientific arguments for fire VERSUS water, as well as fire AND water, as driving forces in human evolution. In addition, I will highlight that as scientists we should be open-minded and stay away from “single-issue” approaches. Almost always, nature is more complicated than we think. And in the end, for all or apparent “uniqueness” we are just another mammal on the face of this earth. Therefore, I will argue for a comparative biological approach in order to identify the driving forces in human evolution: we can learn from the evolutionary trajectories of other animals. Finally, some words will be said on the lessons we can learn from our past, for our present lifestyle.

Jose Joordens is a marine biologist who obtained a PhD in geology, and is now a researcher at the Faculty of Archaeology of Leiden University. Her topic is the study of human evolution. With field projects focusing on key sites in Kenya (Turkana basin) and Indonesia (Trinil on Java), she and her team try to understand the origin of our ancestor Homo erectus. In addition, she is strongly motivated to find out what the diet of our ancestors was, and how this can help us today to live healthy and happy lives. 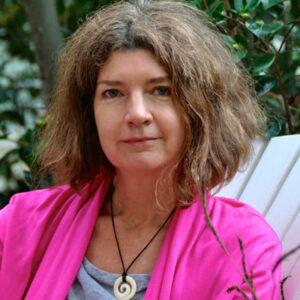 Jose Joordens is a marine biologist who obtained a PhD in geology, and is now a researcher at the Faculty of Archaeology of Leiden University. Her topic is the study of human evolution.