Food Dialogue: What is the best food for athletes, carbs or fat?

The answer used to be ‘carbs’ unanimously. Lately, some will say ‘fats’. Prof. Timothy Noakes used to answer ‘carbs’, but he changed his mind. Today he argues that athletes should focus on healthy fats for the majority of their calories. Prof. Noakes was the chair of the Research Unit for Exercise Science and Sports Medicine of the University of Cape Town, until he retired in 2014. Prof. Fred Brouns argues that athletes should get up to 50% of their calories from carbohydrates, focusing on whole grains, fruit and vegetables. Prof. Brouns is the program leader of the master program Health, Food and Innovation Management at the University of Maastricht.

During the first Dutch Ancestral Health Symposium on Saturday 26 September 2015 in Groningen Noakes and Brouns discuss the question whether athletes should focus on fats or carbohydrates, assuming equal protein, in their daily eating pattern and on the day prior to competition. It promises to be an interesting discussion. Nothing is taken for granted, from the assumed health benefits of marathon running to the amount of energy an athlete can generate from burning fat.

To start with the latter, results from Noakes’ and Brouns’ colleague and friends Achten and Jeukendrup showed that well-trained athletes can burn on average a maximum of 30 grams of fat per hour when being on a relatively carbohydrate rich diet. That’s wrong, argues Noakes. Phinney and colleagues showed an average maximum of 90 grams of fat per hour in fat-adapted athletes twenty years earlier. Today, Volek is collecting data that seem to confirm the latter: Runners who structurally eat a low-carb, high-fat diet show a higher fat max compared to runners who structurally eat a high-carb diet.

So, why would an athlete want to burn fat? Because people carry a lot of fat with them, Noakes says. Even a lean athlete easily carries 30,000 calories of fat. Let’s count. A 70 kg athlete with as little as 5% body-fat carries 3.500 grams of fat. Each gram of fat contains 9 calories, which adds up to, indeed, more than 30,000 calories. That’s a lot compared to the 2,000 carbohydrate calories an athlete can store in liver and muscle.

You can’t win an Olympic marathon on fat, argues Brouns. This exercise intensity requires more energy per second than fats can deliver. An argument countered by Noakes with calculations of how many carbs carbohydrate-adapted and fat-adapted triathletes need to run the final marathon in 2 h 40 min. Noakes’ conclusion: the carb-adapted triathlete needs to rely on exogenous sources of carbs, whereas the fat-adapted triathlete can rely on his own resources for this final stretch.

Brouns disagrees with that. If that is really the case why is there not one single study that shows improved performance at intensities above 70% of maximal oxygen consumption in athletes adapted to high fat diets? Being glycogen depleted, which is also the case in keto-adapted endurance athletes, power output drops < 60% of maximal capacity, a phenomenon known as bonking. The latter is no problem in ultra-endurance events, such as the triathlon, where exercise intensity is < 65% of VO2max.

So, it may be better to rely on carbs for performance in events up to a couple of hours where the combination of fat and sufficient carbs availability results in the higher energy output required. Only for very long events you might want to be fat-adapted?

There are more reasons to make sure you are fat-adapted, according to Noakes. He speculates that high carbohydrate consumption might be the cause of the poor dental health observed in elite athletes. Even worse, Noakes speculates that it could be the cause of the observation that marathon runners are not at lower risk for cardiovascular disease than sedentary people. Not just highcarbohydrate diets, but also high-fat diets are related to increased risks for diabetes and cardiovascular disease, says Brouns.

During the Food Dialogue on Saturday 26 September 2015 Noakes and Brouns discuss the question whether athletes should focus on fats or carbohydrates, assuming equal protein, in their daily eating pattern and on the day prior to competition. Noakes and Brouns will specifically discuss the following questions:

The Food Dialogue will be moderated by Esther Nederhof and Marcel Crok. 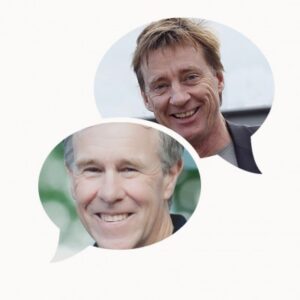